On Tuesday 12 January 2010, Haiti was hit by an earthquake which destroyed the capital Port-au-prince completely, left millions homeless and made more than a hundred thousand deadly victims. The people who are left behind can use all the support they need and therefore the world is coming into action. That includes the independent iPhone developers community and therefore we and over 60 other iPhone and Mac developers have decided to donate all revenue our apps generate on the 20th of January 2010 to a good cause which is currently aiding the Haitian people.

All our paid app’s revenue on the 20th of January will hence be donated to “Artsen zonder Grenzen”, the Belgian variant of doctors without borders. In this way we can relieve the pain of the Haitian people at least a little bit.

Alone we won’t make much of difference, but all together we can make a huge difference and try to aid this country in need.

Here you can find a list of all our apps :

And here you can find a link to the indie relief website which lists all involved developers and apps:

MonoPhix (App Store Link) has been one of the most evolved -Phix apps we built to date. When something is finally rich in features, you can cut some features away and make it available for free and that’s what we did. With MonoPhix lite (App Store Link) you can now finally enjoy high contrast adjustable black & white filtering for free on your iPhone or iPod Touch.

MonoPhix lite is practically the same as MonoPhix, it converts your iPhone’s pictures to Monochrome at full resolution, but with a few changes :
-The sliders which enabled you to control light and dark shades separately have now been merged into one contrast slider
-The Presets to set the depth or contrast with one touch are missing
-The ability to use sepia and antique filters in addition to the black & white filter are missing
-There’s an ad displayed in the startup screen to allow people to upgrade to full MonoPhix 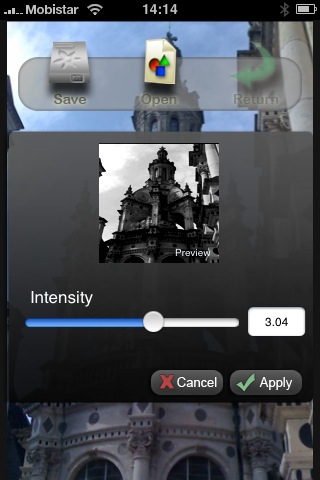