On Tuesday 12 January 2010, Haiti was hit by an earthquake which destroyed the capital Port-au-prince completely, left millions homeless and made more than a hundred thousand deadly victims. The people who are left behind can use all the support they need and therefore the world is coming into action. That includes the independent iPhone developers community and therefore we and over 60 other iPhone and Mac developers have decided to donate all revenue our apps generate on the 20th of January 2010 to a good cause which is currently aiding the Haitian people.

All our paid app’s revenue on the 20th of January will hence be donated to “Artsen zonder Grenzen”, the Belgian variant of doctors without borders. In this way we can relieve the pain of the Haitian people at least a little bit.

Alone we won’t make much of difference, but all together we can make a huge difference and try to aid this country in need.

Here you can find a list of all our apps :

And here you can find a link to the indie relief website which lists all involved developers and apps:

Our famous multiplatform Yu-gi-oh! LPC iDuelpro is now available for free as iDuelpro Lite. iDuelpro Lite has enough features to overpower other free LPC’s and the ones who are interested can upgrade to full iDuelpro with a small ad in the App for just 0.99$.

iDuelpro Lite is based on iDuelpro v3.3 which means that it has added functionality to the current full version v3.2 in the form of the auto-save feature.

iDuelpro Lite has the following features :
-Lifepoints tracking for both players
-Progress bars to visually represent a player’s lifepoints
-Quick Subtract and add buttons for amounts like 1000, 100 and 5.
-Ability to subtract and add a custom amount of lifepoints
-Ability to declare a draw
-Superfast calculating speeds
-Can also be used for magic the gathering
-The easiest interface for a lifepoints calculator ever
-Automatic game state save at quit (This is even new to iDuelpro as it will only be available in full iDuelpro 3.3)
-Notification who has won
-Online Help file

Yes, that was the event we were planning. A free version of our Yu-gi-oh! lifepoints calculator for iPhone, iDuelpro.

And yes, we admit. The competition in the Yu-gi-oh! section of the iTunes Store went up the last couple of weeks. We started fishing with 12 people in a puddle with only a few fish in it and this raises competition of course. Many MTG application developers are switching to yu-gi-oh! as well to gain some extra bucks.

Therefore we have to raise focus on iDuelpro Mobile. Our iDuelpro Mobile 3.2 was approved this week and now a free version of iDuelpro will appear as iDuelpro Lite. In this way we can destroy competition by providing our free version in the free apps segment and there are also in-App ads so people can decide to upgrade to the normal iDuelpro if they want more features. iDuelpro Lite has more features than the only free Yu-Gi-Oh! LPC currently available and will not cannibalize the iDuelpro Marketshare because it’s in a different pricing segment. But if people decide not to pay for an App they might as well decide to not pay for an App provided by us. In this way we can provide people with a decent yugioh LPC without the need of a credit card or without having to pay anything.

The full iDuelpro will also get a whole bunch of extra features in a while with version 3.3 and version 4.0 in October.

So this is another step in getting a unified version yu-gi-oh! LPC on every operating system and device.

We expect iDuelpro Lite to hit the App Store within a few hours, so keep an eye out. We will also tweet and post another blogpostwhen it is online.

Therefore we have to raise focus on iDuelpro Mobile. Our first declined submission for iDuelpro 3.2 will now be up in the App Store soon and on the front page of the games section and we are also doing something remarkable. In a while a free version of iDuelpro will appear as iDuelpro Lite. It has been submitted to the App Store and so we’re waiting. In this way we can destroy competition by providing our free version in the free apps segment and there are also in-App ads so people can decide to upgrade to the normal iDuelpro if they want more features.

After a long time we have released another update to iDuelpro Mobile, an iPhone OS version of Duelpro, the most used yu-gi-oh! tcg lifepoints calculator.

The new version contains an entirely revamped smooth black interface with toolbar. Also the custom input box to enter a number of lifepoints to operate with has been replaced completely by a series of buttons with predefined amounts. Also the useless card counter has been removed and the empty space is now filled by buttons to halve a player’s lifepoints and buttons to simulate coin flips and dice rolls. For the first time also an online help file has been added.

iDuelpro Mobile 3.0 will soon be available in the iTunes Application store for 0.99$. Yes, we have to charge a small amount for iDuelpro Mobile because we have to pay 99$ a year to Apple to be allowed to make Apps for the iPhone. So without this minor charge iDuelpro for iPhone and iPod Touch would be condemned.

This new version has the same quick operation buttons as iDuelpro Mobile and fixes some other minor issues, it also has a contrast mode for people who were unable to view the light interface.

It has already been added to most sites including yugioh-world and Pojo. But you can find it here on our site : http://www.phoenxsoftware.com/duelpro2008.html

I red a few comments on the current test release of iDuelpro Mobile for the iPhone and I learned a few things out of this. So I started the development for iDuelpro Mobile 2.0 and it’s already finished!

But don’t cheer too soon, it still has to be put online and this release process could suffer gigantic issues because, well the service Apple provides for iPhone developers just sucks.

You can expect the following improvements :
-Ability to add lifepoints
-Lifepoints bars to get a visual interpretation of a player’s lifepoints
-Quick keys to subtract amounts as 1000, 500 or 100
-Slightly altered interface
-Special page for Duelpro/iDuelpro/iDuelpro Mobile

So I hope you will enjoy this release if I ever succeed to release it into the App Store. It is expected to be released within the next 3 weeks.

Whilst iDuelpro covers most non Windows OS’s, Duelpro remains the dominant yugioh! lifepoints aid. So we have to take some care of it.

While browsing the web I discovered another lifepoints aid which is obviously bad programmed and is shareware. I wasn’t impressed but it put me thinking. Isn’t it fun to use a lot of technology and professional programmers/designers/marketeers and put them on a market that is filled with hobbyists and basic software?

So hereby we are actually going to invest time and money in the development of Duelpro 2009.

We already control 95% of the global yugioh lifepoint aid software market, but we are going for 100%! 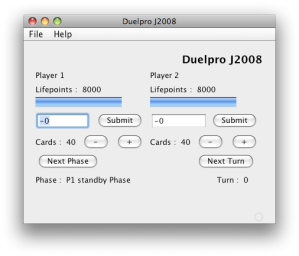 I think this speaks for itself…

Remember that this is still a development milestone and that there is no guarantee of this being released. This screenshot is taken from a debug run under netbeans 6.1.